The final round of the sectional stages pitted the two leading clubs in Section 4, St Michaels and Stonecutters Ridge, facing off at a rain sodden Penrith Golf Club. With the teams on equal points and St Michaels just 0.5 an individual game ahead a win was the required outcome for Stonecutters to steer a path to the semi-finals.

St Michaels, the defending champions lined up with NSW Team member Harrison Crowe at 1, NSW High Performance squad member Jordie Gardner at 2 and then followed by Weilang Wang, Aidan Powter, Jeffrey Pullen, and Daley Loumanis to round out their team.

Stonecutters Ridge fielded a re-arranged team with Cameron Rios-Ceballos currently winging his way to the US to start his college scholarship in Kansas. The team line up was led by team captain Harrison Wilde at 1, Kade Webber at 2, Will Blomley at 3, Ryan Cadle at 4, Alex Payne at 5 and Miguel Villa rounding out the team at number 6.

Ryan Cadle, elevated up the order to number 4, had a challenging start with his opponent Aidan winning four of the first five holes to stand 4 up on 6th tee. Ryan won that hole to go back to 3 down but Aidan responded winning 7 and 8 to turn 5 up at the break. As the weather closed in and conditions deteriorated to what could be called diabolical, Aiden closed out the first victory of the day for St Michaels on 12 with a solid 7/6 victory.

Alex Payne at 5 and his opponent Jeffrey had a tight battle on the front nine with the St Michaels player having a slight 1 hole advantage at the turn. In worsening conditions Alex battled hard but could not match Jeffery as he handled the wet conditions best to win the match for St Michaels 5/4.

Kade Webber, started strongly against Jordie Garner, halving the first with a birdie and then winning 2 with a solid par. Jordie struck back on 4, 5 and 6 after Kade’s tee shots found tree trouble on those holes to lead 3 up after 7 holes. Kade struck back winning 8 to go back to 2 down but a fortunate break for Jordie on his tee shot followed by a terrible one for Kade meant that Kade had to be happy with his two hole deficit at the turn after holing a great putt on the 9th green to halve the hole.

Will Blomley, found himself 2 down after 4 against Weilang Wang and then 3 down after 7. Will fought hard all day in trying conditions eventually falling to a 4/3 loss. A courageous display from our number 3 on a day that was difficult in more ways than one. What a great addition Will has been to our squad this year.

The battle of the Harrison’s was an enthralling and high quality encounter. Harrison Crowe birdied 4 to go 1 up and Harry fought back with a great effort on the par 3 7th to square the match. On 9 an amazing up and down 4 to the St Michaels no 1 salvaging a halve meant they turned all square.

Miguel Villa at 6 and his opponent Daley Loumanis fought another tough battle with Miguel turning 1 up after 9 holes. After the turn Daley got the better of Miguel early on the back line turning the match to a one hole lead after 13.

Meanwhile on 10 there was little Harry and Kade could do other than applaud their opponents birdies on 10 to take the St Michaels pair out to 1 up and 3 up respectively. Jordie Gardner closed out the number 2 match for St Michaels on 14 winning 5/4 but Kade can hold his head high for his effort and determination against a highly credentialed opponent. Harry, as expected, continued to battle tenaciously but eventually fell 4/3 to his opponent.

In horrendous conditions, 8 degrees and heavy rain, and no caddies our last player out on course was Miguel Villa. Shivering and with great determination, Miguel won 15 with a great up and down par to get back to square. On 16 and 17, however, Daley made 2 great pars that closed the final match out 2/1 in St Michaels favour.

The final match result read St Michaels 6 Stonecutters 0 but it would be fair to say that it was lot closer than the final result indicated. Stonecutters finished in second place in their group again this year and this young team have certainly setup a great base from which to launch an assault on the Eric Apperly Shield in the coming years. They have their eye on matching the efforts of our 1980 team that brought the shield home 40 years ago and who would question it after another good season.

Special thanks to the Manager (Ray Clapham), Coaches (Ashley Crammond, Jordan Chesham and Steve Gannon), member Kirk Buckley who assisted with coaching and the caddies, parents and members who supported these young men this season. 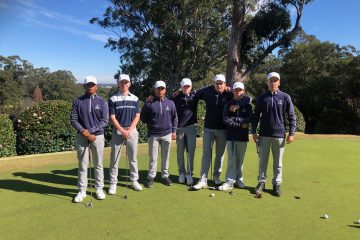 The second round of the Apperly shield was due to be played at Long Reef against Killara however it was cancelled due to wet weather, this resulted in a draw and the points were halved.

On the 2nd of August the team played at Killara against Penrith with much better weather conditions. The overall score was 5.5 to .5 which was a good win to Stonecutters.

Kade started off with 3 birdies and an Eagle which put in a good place for his win of 5-4. Cameron played a solid game of golf to win his match 5-4 which was a little different for his normal round where he likes to play the 18 holes. Miguel won his match on a forfeit but played match play against Ryan which was a friendly competition. Alex started off on the wrong side however he fought back and won 2-1.  Will played a consistent game of golf throughout the 18 holes it was an exciting game where the match play went hole by hole, to the last hole and they ended up square.  Harry secured his win with a great putt on the 18th hole to win 1 up.

The team would like to thank Will and Harry who played exceptionally well after their win in the 36hole playoff in the Clifton Shield on Saturday.

This week we are playing at Penrith against St Micheals which is the last round, we are both equal and on top of the ladder the winning team will progress to the semi-finals.

Due to COVID-19 spectators are limited to one per player and there are no caddies allowed, so we wish the players good luck and good golfing.

View the current leader board HERE